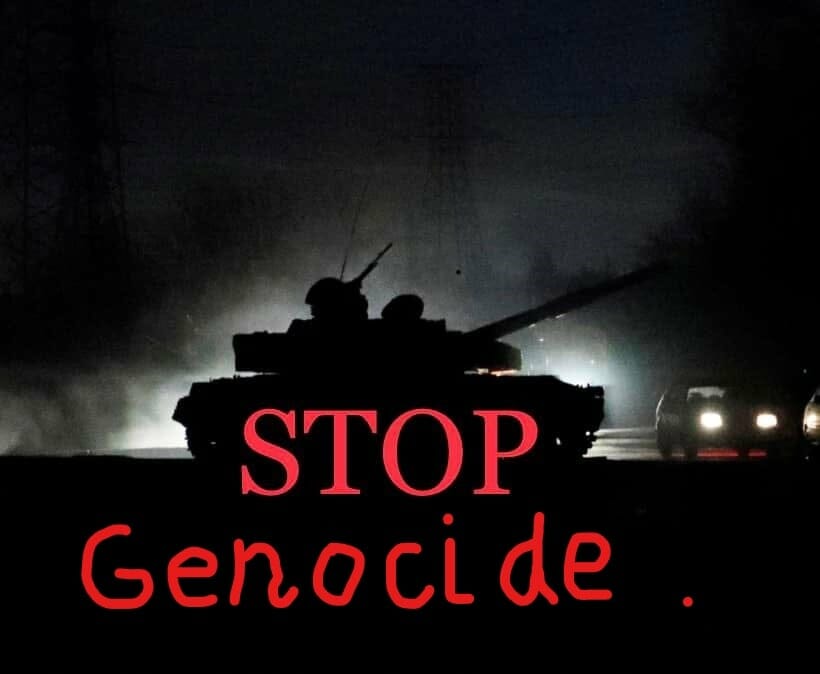 The enemy has come to Ukrainian lands, to our homes. It has come to kill us methodically, ruthlessly, despicably, to kill with artillery fire, missiles, bombs, machine gun fire, shots to the back of the head. People are deprived of their lives simply because they are Ukrainians and want to remain free. All of this is happening at the beginning of the third decade of the XXI century in the country where the geographical center of the European continent is located. All of this is happening in the age of the Internet, nanotechnology, genetic engineering, mass robotics and the study of other planets.        Listen to us! Listen to the pleas of suffering Ukrainian women with hungry babies hiding in basements, the cries of children frightened by explosions, the mute silence of the unborn. Hear the prayers of those Ukrainian women who realize that they themselves, their children, husbands, parents can be killed anywhere, at any moment! Hear Ukrainian women, millions of whom are forced to leave their native land and go abroad to save themselves and their children.        All these horrors merge into one question: “How do the people of other countries, the billions of people living on planet Earth, feel today?” I’m not asking about Russians: moral freaks, unscrupulous creatures, heartless criminals who kill us every day, or enthusiastically support their crazy Fuhrer and Russia’s aggression against Ukraine. These degenerates do not even realize what’s “wrong” with the war against the neighboring sovereign state. Since ancient times the Russian state has been based on assassinations and lies. Russia cannot exist without murders and lies. Russians have always killed those who didn’t not want to be a part of their slave kingdom and their killings have always been justified by false, diabolical fabrications.       I appeal to those who are considered “world leaders” today. Today you are afraid to “close the sky”, to hand over tanks and planes to Ukrainians. You are terrified of World War III. Isn’t it there? If you do not have enough courage and strength to stop the mass murder of Ukrainians, do not declare yourselves “world leaders.” Yes, you are helping us, but in Ukraine, in addition to war crimes, there is a crime of GENOCIDE!     We, Ukrainians, will definitely win! The only question is the price of victory. Whoever says today that we will cry after the victory is wrong. Human life is priceless! Ukrainians want to live today!STOP THE AGGRESSION! STOP THE WAR! STOP THE GENOCIDE!Svitlana Markova, Doctor of History, Director of the Holodomor Research Institute of the National Museum of the Holodomor Genocide